Courtesy of Microsoft Malaysia, I was invited to the launching of Microsoft's long awaited new Windows @ Plaza Low Yat.  On 29 Oct 2012, Microsoft Malaysia unveiled its latest operating system, Windows 8, which is designed for a no-compromise experience for work and play across various device form-factors. Windows 8 now available together from desktop-based All-in-Ones, to laptops and ultrabooks, as well as new hybrid and tablet models.

Katoon Network, one of the talented dance group in Malaysia performed a series of dance featuring Windows 8 during the launch in Malaysia.
Windows 8, the highly anticipated touch-optimized operating system has garnered more than 16 million preview participants to date and is considered to be the most tested, reviewed and ready operating system in Microsoft’s history with over 1.24 billion hours of testing.

Some of the main features of Windows 8 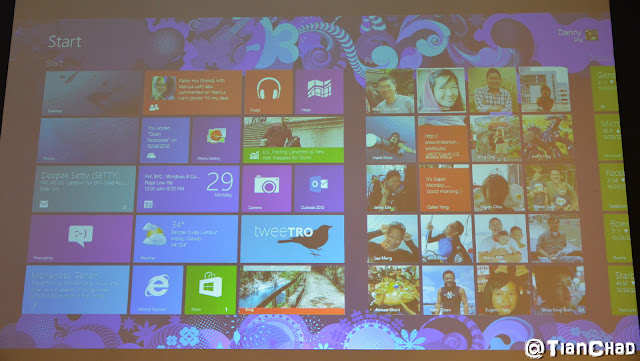 The Live Tiles feature in Windows 8, meanwhile, provides seamless connectivity to multiple social applications thus delivering updated information at a glance without the hassle of attending to multiple applications simultaneously.

Sebastian Anthony, Senior Editor at ExtremeTech compared his initial Windows 8 experience with its closest competitors. “Windows 8 and the Metro/Modern/Rectilinear interface are an absolute joy to use on a touchscreen. They blow Android and iOS out of the water in terms of ease of use, functionality, and speed,” he said.

Danny Ong and Tenh Shiao Peng from Microsoft Malaysia demonstrated how they personalized Windows 8 on their ultrabook and hybrid tablet and show us what's the function of Windows 8 they like. I couldn't deny that Danny has nice underwater photos on his ultrabook, and yeah he really love his daughter haha.

With the immediate availability of Windows 8, consumers in Malaysia will also have access to a plethora of new Windows 8 optimized PCs and tablets plus a wide range of local and international apps from the new Windows Store.

As of launch date, hardware partners in Malaysia have announced the availability of Windows 8 certified devices which are available at all major retail outlets. These include ultrabooks, tablets and hybrid devices from Acer, Asus, Dell, Fujitsu, HP, Lenovo, LG, Samsung, Sony, and Toshiba (please refer to below for more details).

“The support from our partners is critical for the success of Windows 8 and as you can witness today,  there is an array of brand new, exciting devices and apps -- all carefully designed to work beautifully with Windows 8,“ said Ananth.


Users can browse thousands of apps or use the Search Charm to quickly find the app they want. And, in many cases users can try the apps before they buy, so they don’t have to commit to an app they aren’t sure about.

Local momentum for Windows 8 adoption has been encouraging. In fact, some of the popular local apps that are immediately available for download include apps from The Star Online, MYDIN, AirAsia, DiGi and Sunway Lifestyle. In conjunction with the launch of Windows 8, local celebrities Noh Salleh (better known as Noh from the local music band Hujan) and Mizz Nina have also announced their collaboration with Microsoft in an online project known as Passion8.

“The music industry is filled with all sorts of exciting elements, challenges and accomplishments. But all this means nothing without my fans that choose to be a part of my musical journey,” said Noh, adding that fans can engage with him and contribute towards a piece of music that he will compose during the Passion8 project.

Under this project which will run for eight weeks, Mizz Nina and Noh will use technology as a platform to engage with their fans on their respective passions – fashion for Mizz Nina and music for Noh.  Apart from interacting with fans on various social media platforms, the Passion8 Project will also be aired on 8TV over eight weeks.

According to both Mizz Nina and Noh, the Passion8 project represents the ideal opportunity for them and their fans to share their experience, exchange ideas, culture, music and fashion, and ultimately to bring to live the magic moments through technology.


Microsoft’s will also be conducting a nationwide roadshow to promote Windows 8 and the new Windows 8 optimized devices. Members of the public will have the opportunity to experience firsthand the new operating system and Windows 8 devices during the following dates and at these locations:

Where to get Windows 8 in Malaysia:
1.    Purchase of a new Windows 8 Device
Consumers will enjoy Windows 8 which comes pre-installed through the stunning array of All-in-Ones; touch-optimized laptops and ultrabooks; and even new hybrid form factors such as convertibles and tablets, made available at all major retail outlets from partners such as Acer, Asus, Dell, Fujitsu, HP, Lenovo, LG, Samsung, Sony, and Toshiba (please refer to Appendix 1 for more details).

2.    Windows Upgrade Offer for consumers purchasing a new Windows 7 PC
The Windows Upgrade Offer provides consumers who buy an eligible Windows 7 PC the option to purchase a downloadable upgrade to Windows 8 Pro for an estimated retail price of just US$14.99 USD during the time of the promotion. This program is available for consumers buying new Windows 7 PCs that are pre-installed with Windows 7 Home Basic, Home Premium, Professional or Ultimate and include a matching and valid OEM Certificate of Authenticity. The Windows 7 PC must be purchased new during the eligibility period of 2 June 2012 to 31 January 2013 and redeemed before the program expiration at the end of February 2013. Consumers who register for the Windows Upgrade Offer will be able to download Windows 8 starting 26 October 2012. The upgrade can be installed on any eligible and compatible Windows PC and comes with 90 days of support from Microsoft.

You can get Windows 8 from participating retailers: